The Sea Maiden: My Accordion Book in Progress!

This has been a summer of such beautiful weather here in Southeastern, MA! What better time to think about the ocean? I put aside my full-size Floyd drawings for the moment to work on the accordion-style book I started in my Drawn to the Sea class a few weeks ago (see blog entries July 5-10). 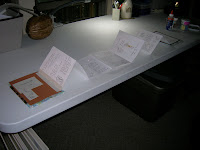 The story is titled “The Sea Maiden” and I wrote in on the waterfront in New Bedford. It is about a woman, formed of sea and sand, who tries to leave her beloved ocean. Needless to say, it’s a bad idea! She returns to the ocean and rejoices!

I assembled the accordion book for this project during the class. An accordion book is a Japanese-style of book binding that has folded and connected pages. The covers are covered with fabric in a stone pattern, and I added a brown batik edge with mossy-looking yarn as accents. A long paper or several glued together need to be folded and attached to the covers, then the book contents can be added. 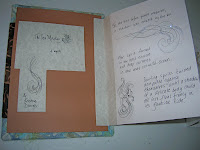 Using micron pen (a permanent marker, like a Sharpie minus the stink) I wrote the story out by hand in my regular handwriting, spacing out sections of the text based on where I wanted the images to go. Then I lightly drew the images in pencil and traced over them in micron pen. I wanted the effect to be very free-form and loose, almost as if there hadn’t been a pencil sketch at all (not brave enough to just wing it!). I erased the pencil lines, then... what to do about color?? 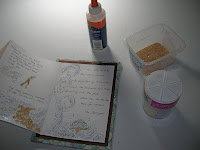 I could’ve left the illustrations black and white but I wanted it to seem really magical, so of course I opted for sparkles! After some testing on scrap paper, I used superfine glitter in different pastel colors as accents on the illustrations. Paper/craft gel glue and a paintbrush made it easy to put the glitter exactly where I wanted it. Okay, I am covered with glitter, and there is glitter sticking to other parts of the book of its own accord, and glitter on my table and probably on my dogs, but, whatever! 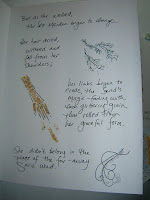 I also took some craft sand, mixed it with some glitter, and used that in some places. It was a lot of fun to do and I think it worked for the most part the way I wanted it to. Now it has to dry completely so the pages don’t stick together when the book is folded up.

Last step will be to add a ribbon to fasten it closed and a sea shell accent on the front. Hopefully I’ll find the perfect shell on my trip to the beach tomorrow!
Posted by Kristine Daniels Studio at 6:23 PM