Recently, jazz pianist Matt Richard went into the studio to record his original compositions for the Floyd and the Irresistible Cookie DVD project (still in progress, produced by Wendy Macdonald and the Somerled Arts Foundation). Here’s an interview with Matt about his experiences creating and recording the music. 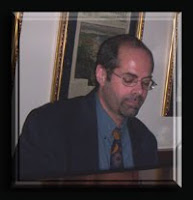 Q. How is composing music for a soundtrack different than composing an individual song?
A. With a soundtrack you have so many more parameters to follow, such as the theme of the story, the exact length of time needed, and the narration. For most of the instrumental songs I write for myself,  I use fairly simple forms and they are designed to be expanded with improvisation. This soundtrack was not improvised.  It has some elements of the jazz style; but most of it would not really be considered jazz.  Although I didn't consciously try to follow a certain style, the influence of Vince Guaraldi (Peanuts) and Johnny Costa (Mister Rogers Neighborhood) is probably there.

Q. Do you write out the music on the computer or by hand on paper?  Why do you use that method?
A. All of the original melodies were hand written first, one by one.  Then I entered them into the music writing program I use which is Sibelius.  I did actually read a printed music score when I did the recording and I followed it pretty much as written.

Q. You are a pianist, but did you imagine different sounds or instruments as you wrote the music?
A. Early on, I had considered a few different instruments but when I found out from the producer that the soundtrack would only use piano, I just stayed with that.  Adding other instruments and players gets a lot more complicated and obviously costs a lot more.

Q. How did the story, narration, and/or illustrations influence you when you were composing?
A. I pretty much followed the story and set up different themes for each section.  I tried to reflect the mood as it went along, and I made sure that none of the music would get in the way of or distract from the narration.  You just try to enhance the story as it unfolds.  Because this video is not animated, the narration is going on throughout with very little down time to expand the music.

Q. What parts of Floyd have different themes?
A. There are some loose themes but they are more related to the scenes as they play out in the story. Surprisingly, Floyd did not end up with a theme even though he is the central character.  I think there are fourteen or fifteen different sections and some themes are repeated. The music runs underneath the entire video which lasts about nine and a half minutes.

Q. Where was the music recorded?
A. I recorded at Peter Kontrimas' Studio in Westwood, MA. I have done five or six different recordings there so I'm comfortable.  Peter is a tremendous sound engineer and the fact that he is an accomplished acoustic bass player adds to his ability understand the recording process.

Q. Describe the experience of recording this soundtrack in the studio.
A. Peter has a beautiful seven foot Yamaha grand piano at his studio and he used two microphones inside the open piano quite close to the sound board.  I wore a set of headphones which allowed me to hear both the soundtrack and the piano together. We recorded the entire soundtrack straight through without stopping and fixed a few things that I didn't like.  Then I did a second take which did not need any edits.  The second take will be the one that will be heard on the video.

To hear some of Matt’s original jazz music, check out his web page at
http://www.mattrichard.com/

Posted by Kristine Daniels Studio at 7:59 AM